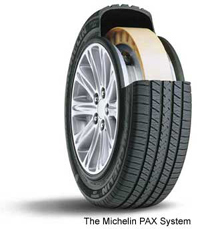 The Michelin PAX is called a system because it is basically a special wheel and an insert inside the wheel without this the PAX system it would not function. The PAX system came about from the need for a tyre that could run flat with out air. Michelin realised there was a market for VIP people driving chauffeur driven cars or people who couldn’t risk a puncture due to security and didn’t have the time to fix punctures on the side of the road. The idea was essentially to create a tyre the could run even in the event of a blow out.

The special insert and rim allows you to drive on the tyre in the event of a puncture, so you don’t get any loss of control, power, braking or acceleration. The Michelin PAX on paper should have been an outright success however it never became popular, it featured on a few cars namely the Rolls Royce Phantom, Audi A8 and that was it. The reason it didn’t gain popularity was largely because they were very expensive tyres. The majority of garages couldn’t mount them, and if you had a PAX system tyre on the car you couldn’t just replace it with an ordinary tyre. The rim and tyre were specially designed for just PAX tyres. Other run flat technology was far cheaper and had gained popularity faster, vehicle manufactures didn’t see the point of the PAX system anymore.