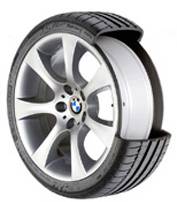 Michelin have named their run flat tyres ZP as in Zero Pressure, they were late to catch on as initially they wanted to develop the PAX system which never did take off. Michelin had no choice but to develop the self-supporting run flat tyre, but other manufactures like Bridgestone and Pirelli already were producing these tyres well before they started. So they had some catching up to do. Their technology was no different to other manufactures hence it didn’t require much introduction when they fist became available. Michelin added the run flat technology to its existing patterns including the Pilot Sport and Pilot Primacy models. The ZP was added to the name title denoting the Zero Pressure.

The Michelin ZP is much safer in the event of a puncture compared to standard ordinary tyres, the tyre itself is very rigid with strong sidewalls making sure it does not slip of the rim and innovative sidewalls and bead are along with its very advanced and high tech construction delivers superb performance in terms of handling and braking in the even of a puncture.